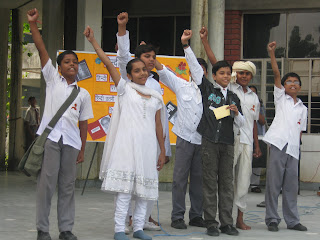 In our school Hindi club was inaugurated on the occasion of Hindi Diwas, 14th Sep.The introductory speech was given by Mr. Satish Sharma, the teacher incharge announced the names of the President, Vice President & Co-ordinator were and they were honoured by Principal Ma’am.
Ms. Akriti Gautam(X) was appointed as the President, Ms. Porshiya Gupta (IX) was appointed as the Vice President & Ms. Apoorva Saxena (VIII) was appointed as the Co-ordinator of the club. Hindi Club organised a skit depicting the importance of Hindi as a language and the neglect that it is facing these days in India, the place of its origin. Students presented a song and a poem on the significance of our national language ‘Hindi’.
at September 17, 2012