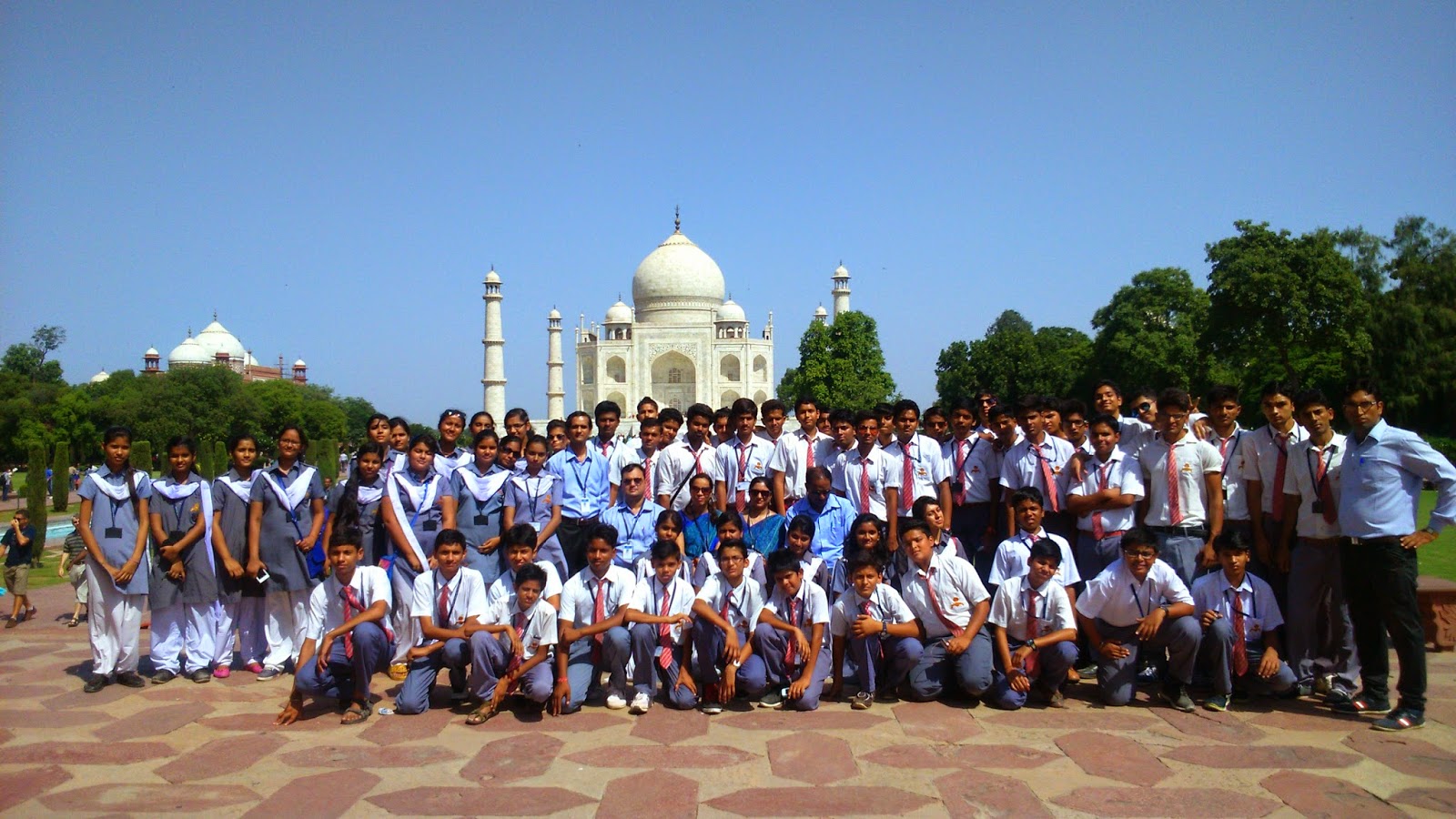 Education is enlightment of oneself to achieve maximum benefit in life by using all the senses activity and bring out holistic growth in a person. There are different ways to provide education to the students. Out of which the most creative and alive is educational tour.
With the consent and blessings of our Honourable Chairman Sir Sardar Ajay Pal Singh Ji and under the guidance of our Secretary Sir Sardar Gurmeet Singh Ji, Saint Soldier Public School Pratap Nagar organized a two day and one night educational tour to Agra and FatehpurSikri on 27/09/14-28/09/14 for classes IX to XII. 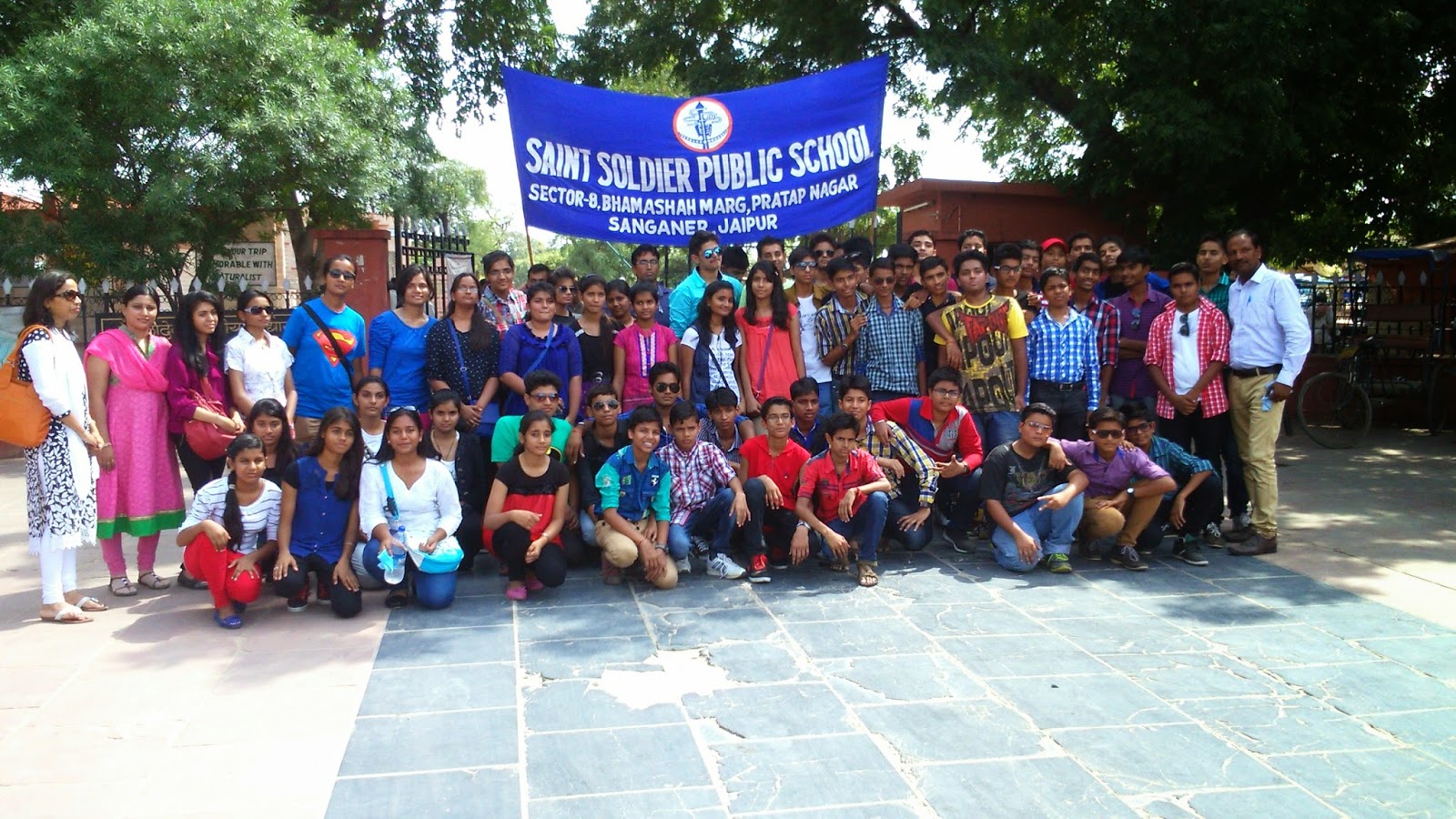 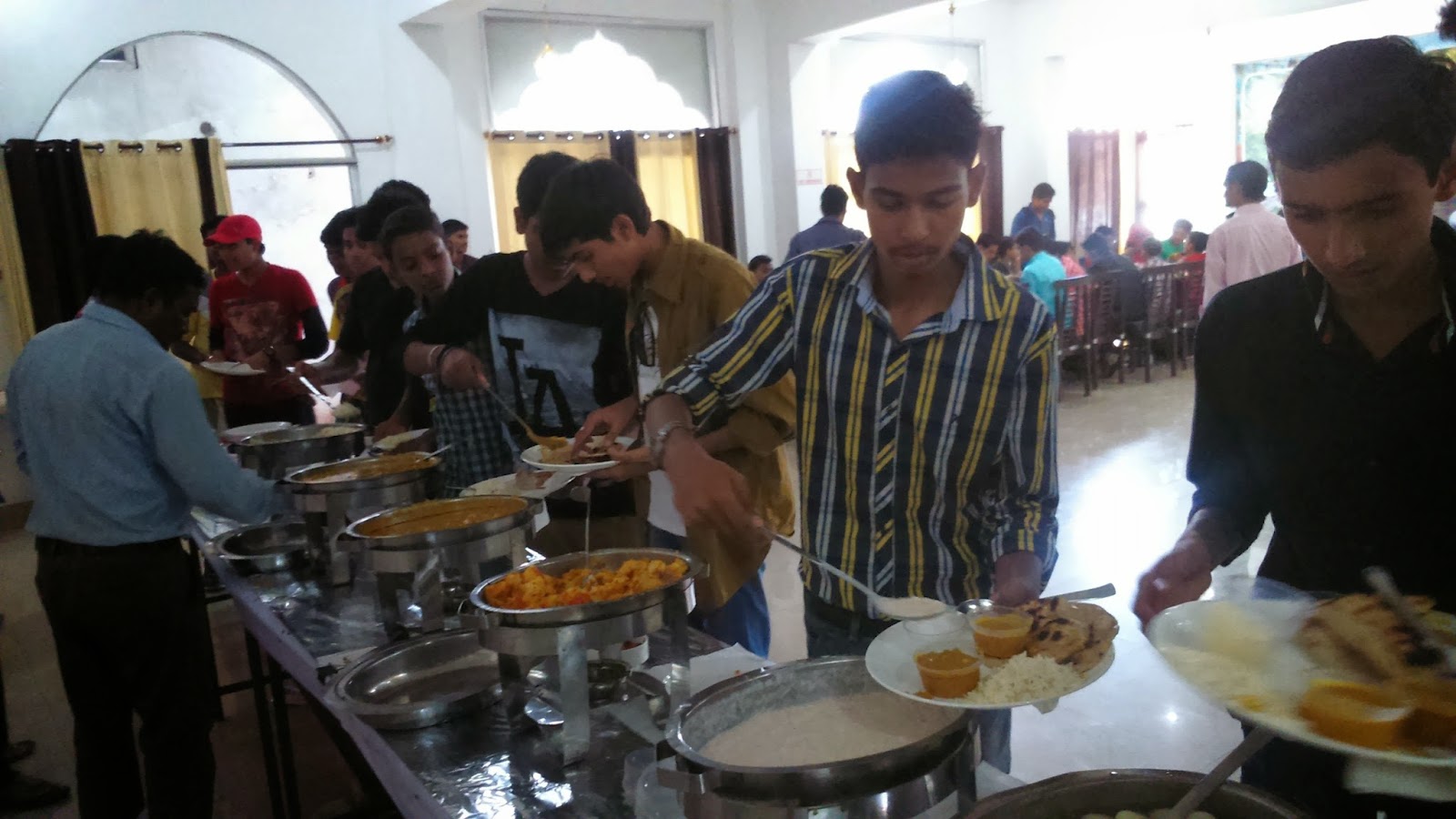 The tour was organized under the vigilance and assistance of our Vice-Principal Ma’am Ms. Gayatri Kulshreshta embarked for their journey to Agra and FatehpurSikri on27/09/14 from the school premises. There were around 62 students escorted by six teachers (Mr. Rajesh Jayswal, Mr. Navneet Babbar, Mr. Mahesh Krum, Mr. Abhay , Ms. Namita Sharma And Ms.SumaMenon). 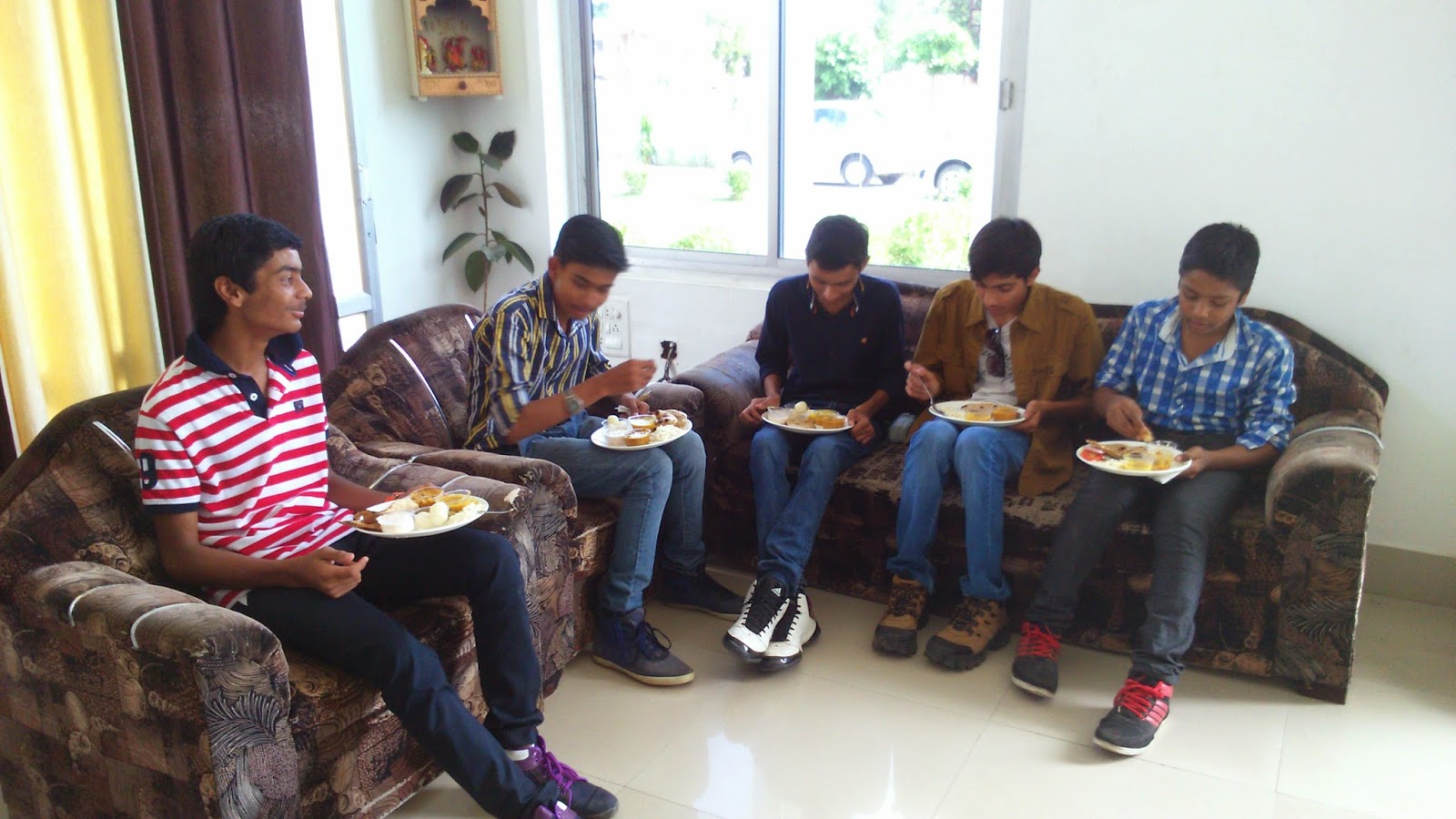 Thejourney began at 6 hours in the morning. We reached at around 10:30 a: m to explore the natural beauty of kaelodaeo bird sanctuary. The students were able to see several herds of the Sāmbhar deer and various migrating birds. The students were highly interested to watch the wildlife so close to them. After spending an hour or two we had our lunch FatehpurSikri added a great deal to the children’s knowledge of historical background and acquainted them better with the rich heritage ofIndia. 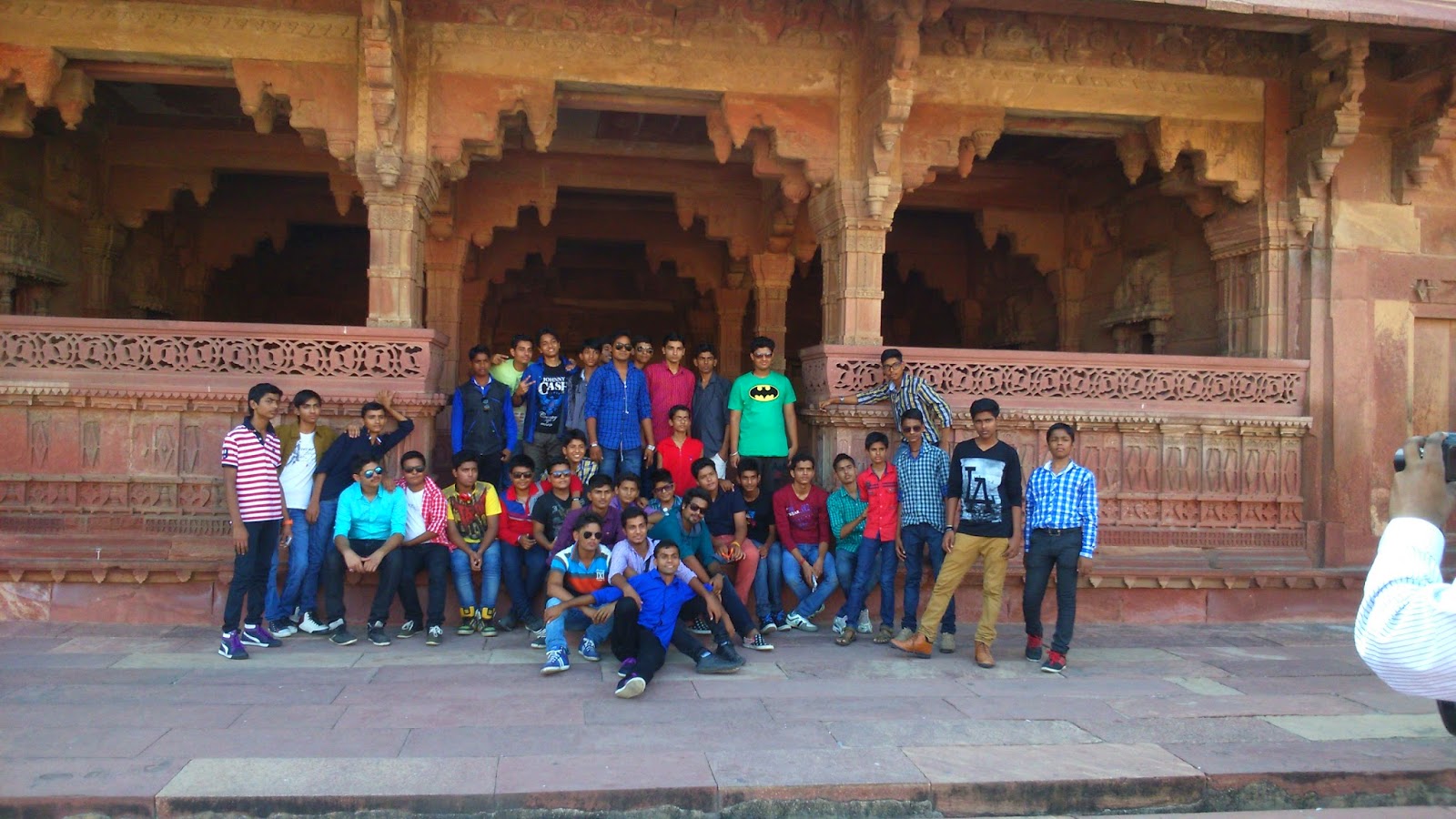 Thereafter we moved ahead for Agra  were the students rested in the hotel for an hour and after refreshing themselves they were all ready to rock the dance floor. The students freaked out themselves and thoroughly enjoyed the dance session. Thereafter the students had their dinner. Next day early morning after having breakfast we went to explore the beauty and splendour of TajMahalthe finest example of Mughal architecture, a style that combines elements from Persian, Turkish and Indian architectural styles.. The visit to the Agra Fort was also truly rewarding. The children were able to collect a lot of information. At each place they hadfun –and ‘Explored the city’, after appreciating and enriching themselves with the rich history of India on 28/09/2014 we returned from our tour for Jaipur with lots of happy memories and knowledge.
The students had loads of fun and enjoyed every bit of the tour to Fatehpur Sikri- Agra.
at September 30, 2014 1 comment: 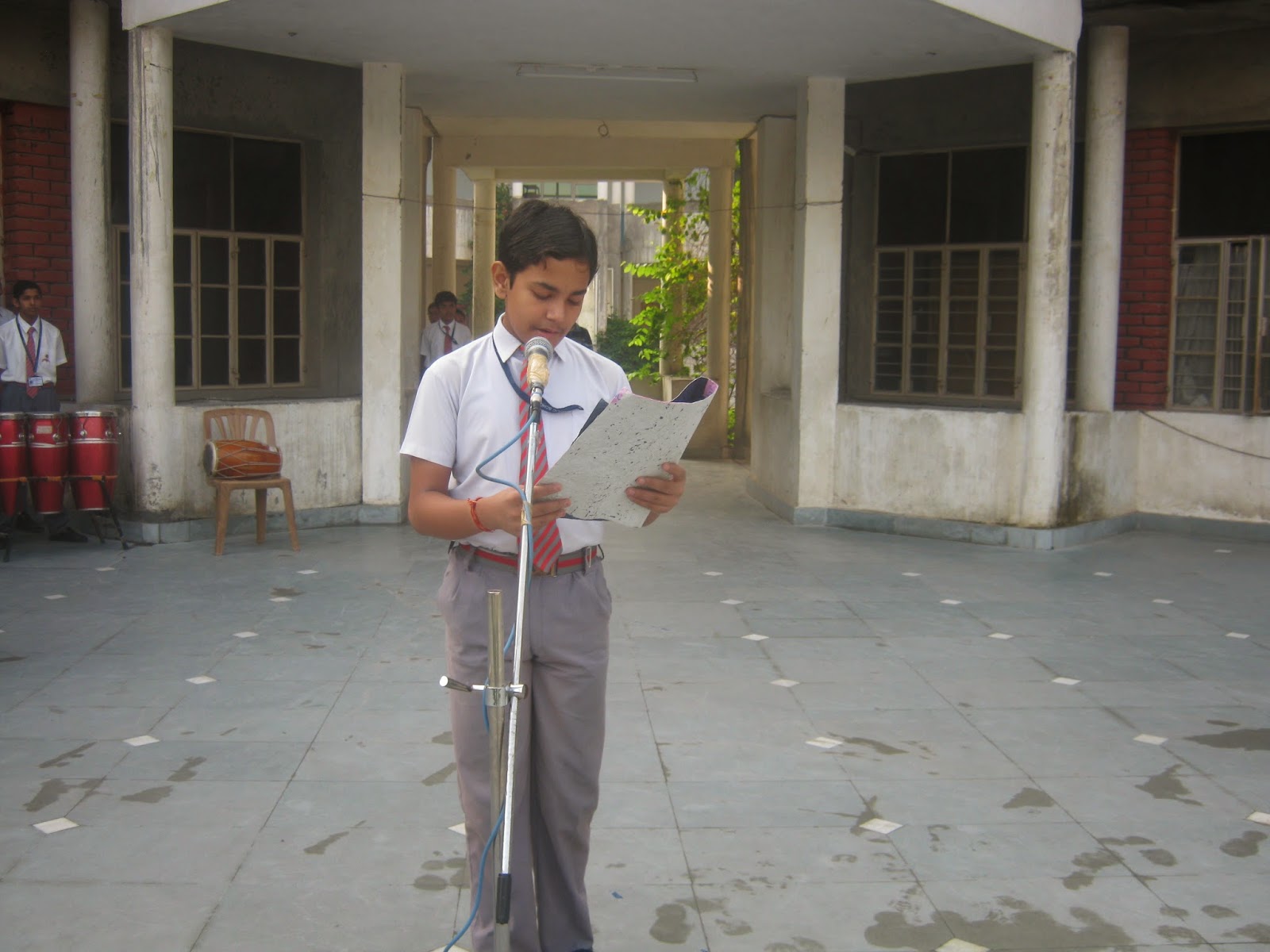 Hindi, the mother tongue of India is considered as language of gods and as sacred as the water of holy river 'Ganga'. The mother tongue always plays a vital role in a country’s growth. Though knowledge of foreign language is not harmful but ignoring one’s own mother tongue at price of it is disgraceful. So to educate students about the importance of 'Hindi', a special assembly was conducted on 12thsep. by class VIII A on occasion of ‘Hindi Diwas’, falling on 14th of sep. the students presented whole assembly in Hindi starting from an inspirational thought and followed by news in hindi. 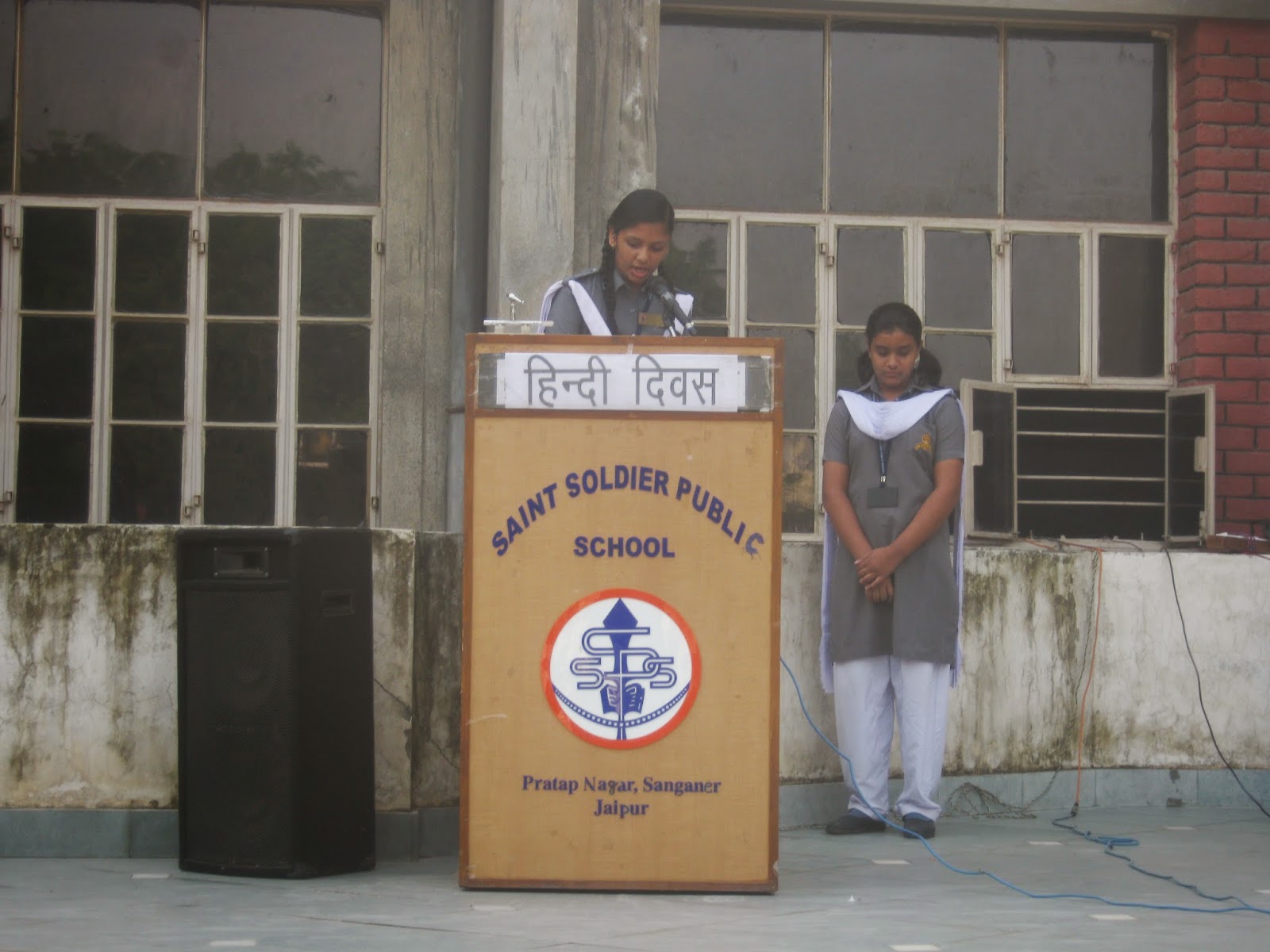 Later Shagun Khandelwal of VIII A delivered a speech, sharing the significance of hindi as mother tongue. She shared the falling situation hindi and discrimination of people towards hindi considering it a sub- standard language and avoid using it in day today life. She also shared highly dignified legacy of hindi poets of hindi literature who earned a worldwide fame for their creations in hindi. In last she urged that everyone should make efforts for growth of mother tongue hindi and make maximum use of it in their day-to -day life. 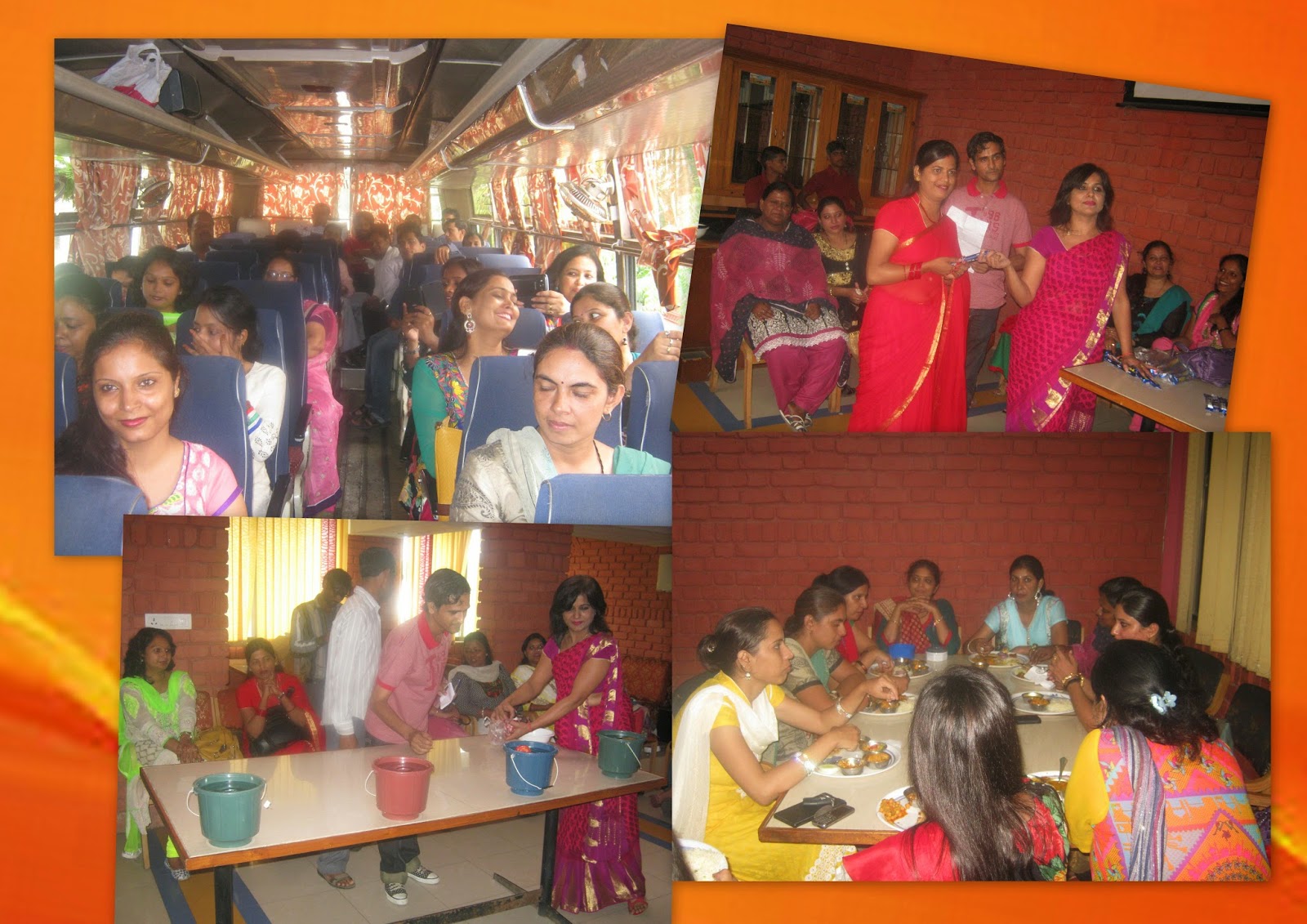 On the eve of Teacher’s Day a teacher’s picnic to ‘Swapana Lok Resort’ was organized to rejuvenate and energize the spirit of teachers. It was a very welcome change from their daily routine.All the teachers were dressed in their best and boarded the bus from the school campus at around 11 a: m.The teachers had a great time in the bus and spent their time together by taking pleasure of the different games played during the bus journey.
We reached at the resort at around 12 noon where the teachers were provided with a welcome drink. The whole day was spent with their colleagues, in a completely carefree manner. To add more fun to this short and sweet picnic our principal ma’am had organized a few fun filling games like “Lemon on Bottle”, “Catching Balls” etc for the teachers. It was the most interesting and enjoyable session of the day. Each teacher got a break to become a child once again and thoroughly enjoyed the game session. Thereafter lunch was provided for the teachers. After an interactive game session teachers relished the lunch. 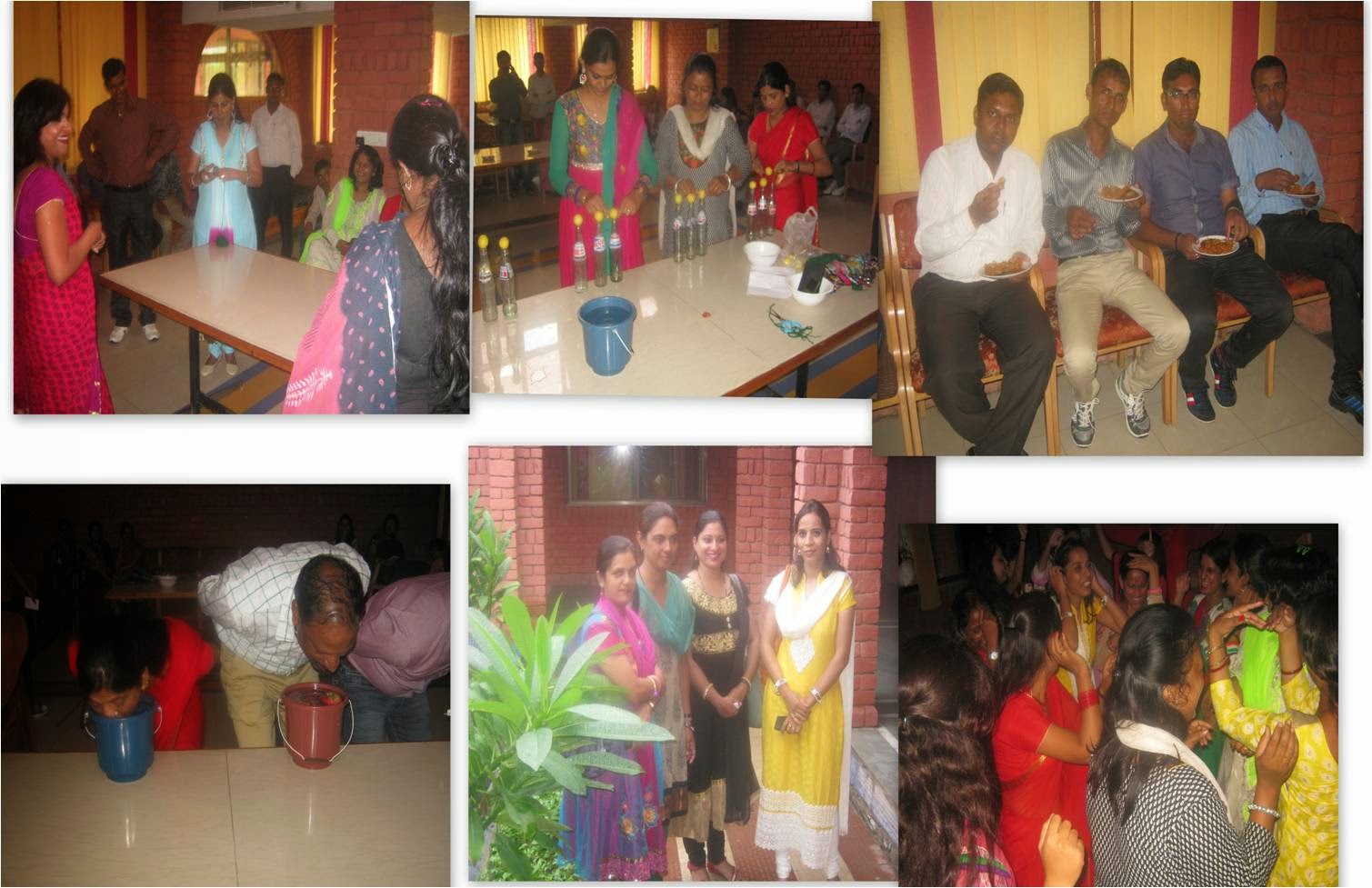 Subsequently the teachers rocked and danced on the D.J floor and enjoyed the rain dance. After freaking out with fun the teachers treasured the lush green ambience of the resort. It made each teacher memorize their school and college days back. It was a golden chance for teachers to have interaction with each other and to chill out.
As is rightly said ‘’ the test of an enjoyment is the remembrance it leaves behind.” 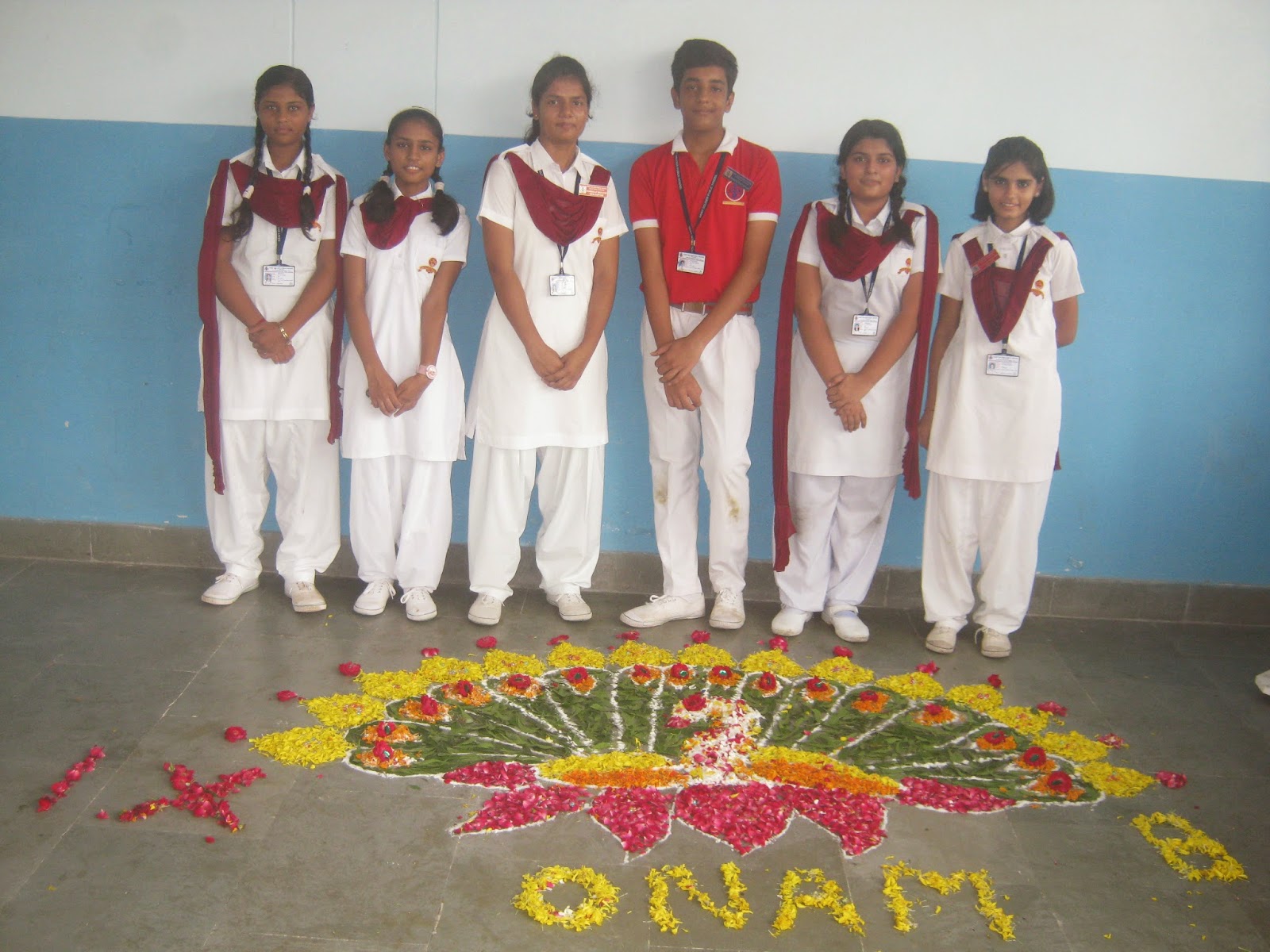 Onam is one of the most popular Hindu festivals of south India. On this occasion people wear new clothes, decorate their houses and put flower carpet called ‘ Pookalam’ in front of their houses, to welcome king Mahabali. 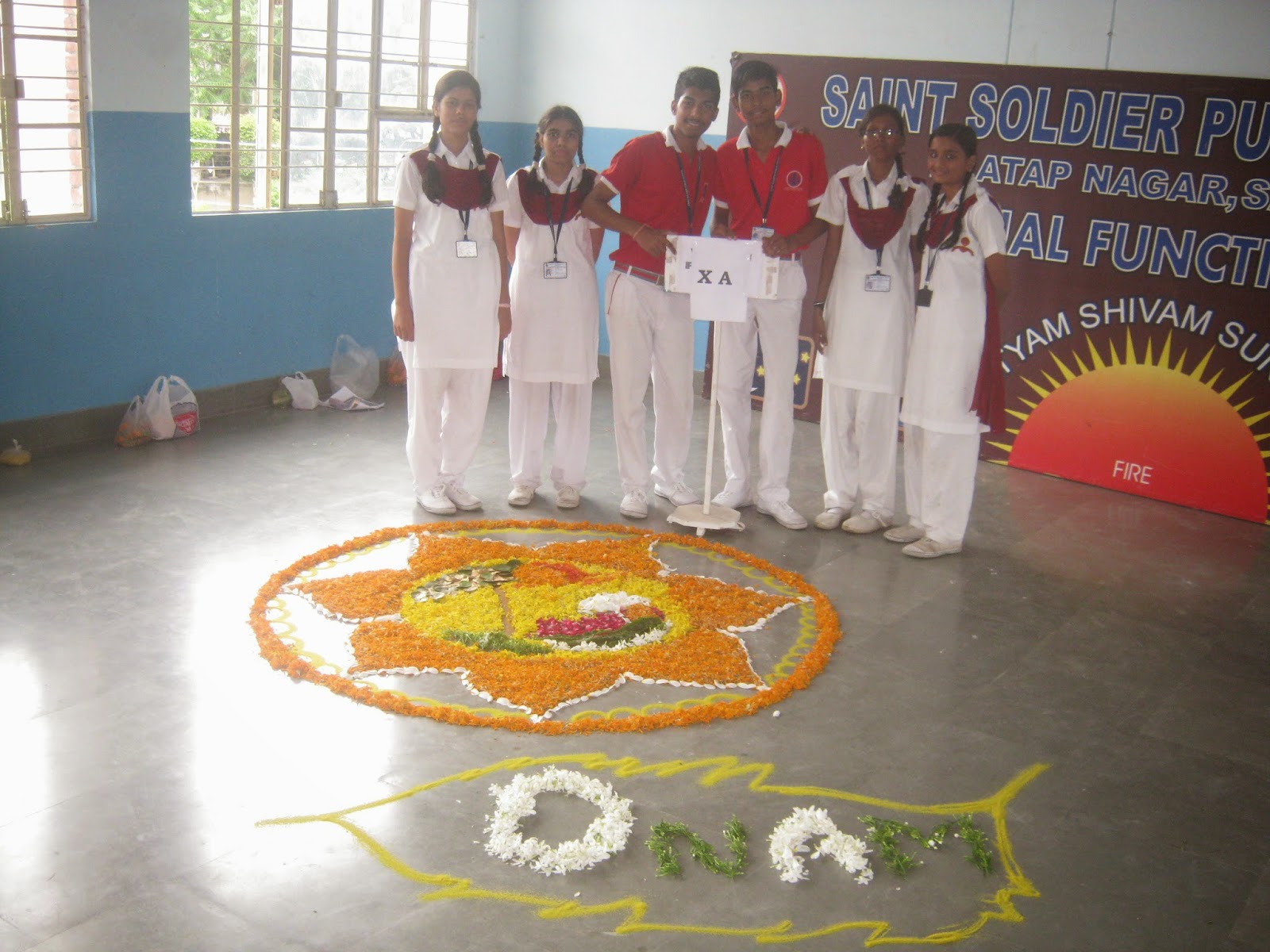 Thus to mark this festival a class wise flower rangoli competition was organized for class’s ix and x in the activity hall. There were six participants from each class. All the participants got various colourful flower petals. The students marvelously decorated their rangoli with colourful petals and leaves.
at September 08, 2014 No comments:

‘’You guided me when I was lost; you supported me when I was weak. You have enlightened me all through.”
5th September birth day of Sarvapalli Radha Krishnan is celebrated world wide as teacher’s day. The students came out with a small cultural programme for the teachers. The celebration initiated with the warm welcome of our respected principal ma’am followed by the teachers. The programme initiated with a song presented by our tiny tots of pre primary section followed by a short skit presenting the role a teacher plays in the upbringing of an individual. Thereafter a song was presented by the senior students thanking all the teachers for being a source of inspiration and to be with them all through their difficult times. Thereafter the senior students presented stupendous group and solo dance performances energizing the ambience. The students of class x enacted a short mime giving the message that how a teacher never leaves hands of his students and give his best to take him out of all difficulties.
At last Ms Rashmi Soman expresses vote of thanks on behalf of all teachers.
The programme ended wishing all the teachers a very happy teacher’s day.

Loyalty to country always …… loyalty to others later A patriot must always be ready to defend his country against all sort of injustice... 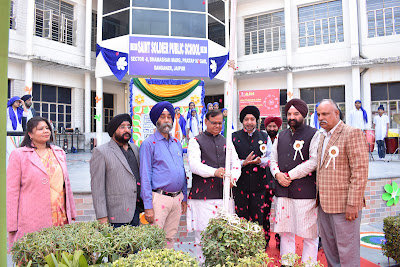