On 18th April 2012, on the occasion of ‘ World Heritage Day ‘, the ‘Heritage Club’ was introduced.
has one of the world’s richest and most continuous of cultures. Unfortunately, much of ’s staggering heritage is in serious physical danger. So on the occasion of World  Heritage Day, the school joined hands together and promised to safeguard our cultural heritage.
The introductory speech was given by the teacher in-charge Ms. Shabnam, where she introduced the President (Ms. Mahima Khandelwal), Vice-President (Mst. Nishant Sharma) and coordinator (Ms. Lotus Kathuriya) to the school. The members introduced themselves and were honoured by Principal ma’am and given the badges.
Later, the members of ‘Heritage Club’ presented a skit before the school on the theme ‘Preserve our Heritage’. 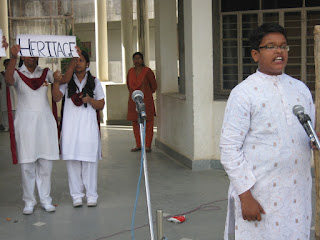