“Education is divine expression in a man”

Not only the nation but across the frontiers also the celebration of 550th birth anniversary of Sat Sahib Shri Guru Nanak dev Ji is going on since November 2018.  In the series so many activities to know and learn about Shri Guru Nanak dev ji’s teaching are taking place. Saint Soldier Public School is also commemorating the same with joy. From couple of weeks the students were well guided and assessed for the quiz series of different rounds.
For classes I to XII Class wise quiz was held and five top scorers were selected for the next round. In this next round the preliminary, a written based assessment was done to select level wise three top scorers. The levels were for students of classes- III to V, VI to VIII, and IX to X & XI to XII. On the basis of the result, teams were made.  On Thursday 25 April the grand session of Quiz took place with the gracious presence of School’s honorary Secretary Sir Sardar Gurmeet Singh ji and the school Principal. It commenced with the prayer song. The quiz was of five rounds as- general, Mcqs, visual based, buzzer & rapid fire round. Team -A of classes III to V, Team –B of Classes VI to VIII, team –C of classes IX to X & team-D of classes XI to XII participated with three top scorers. All tried their best yet the crown deserved the best. To everyone’s surprise the team A of III to V students won the quiz with distinctive difference.


The winner team-A of Sonakshi Rathore of V-B , Yukti Singh of – V-B  and Divyansh Jain of III-A received certificate and appreciation from Secretary sir and Principal ma’am. The runner up team-B of Pariyam Singh-VIII A, Medhanshi Rathore of VII B and Suhani Soni of VII B and other teams also received certificates of participation. Here the school secretary guided the gathering to learn and follow the right path of Shri Gurunanak Dev Ji . The school Principal also motivated the students to follow the teachings and wished gratitude to everyone. 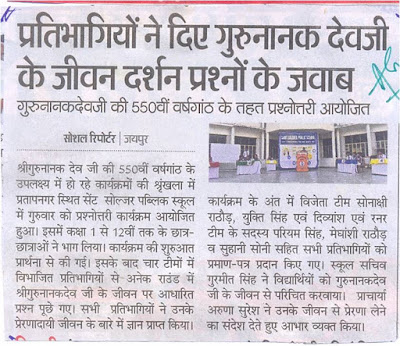